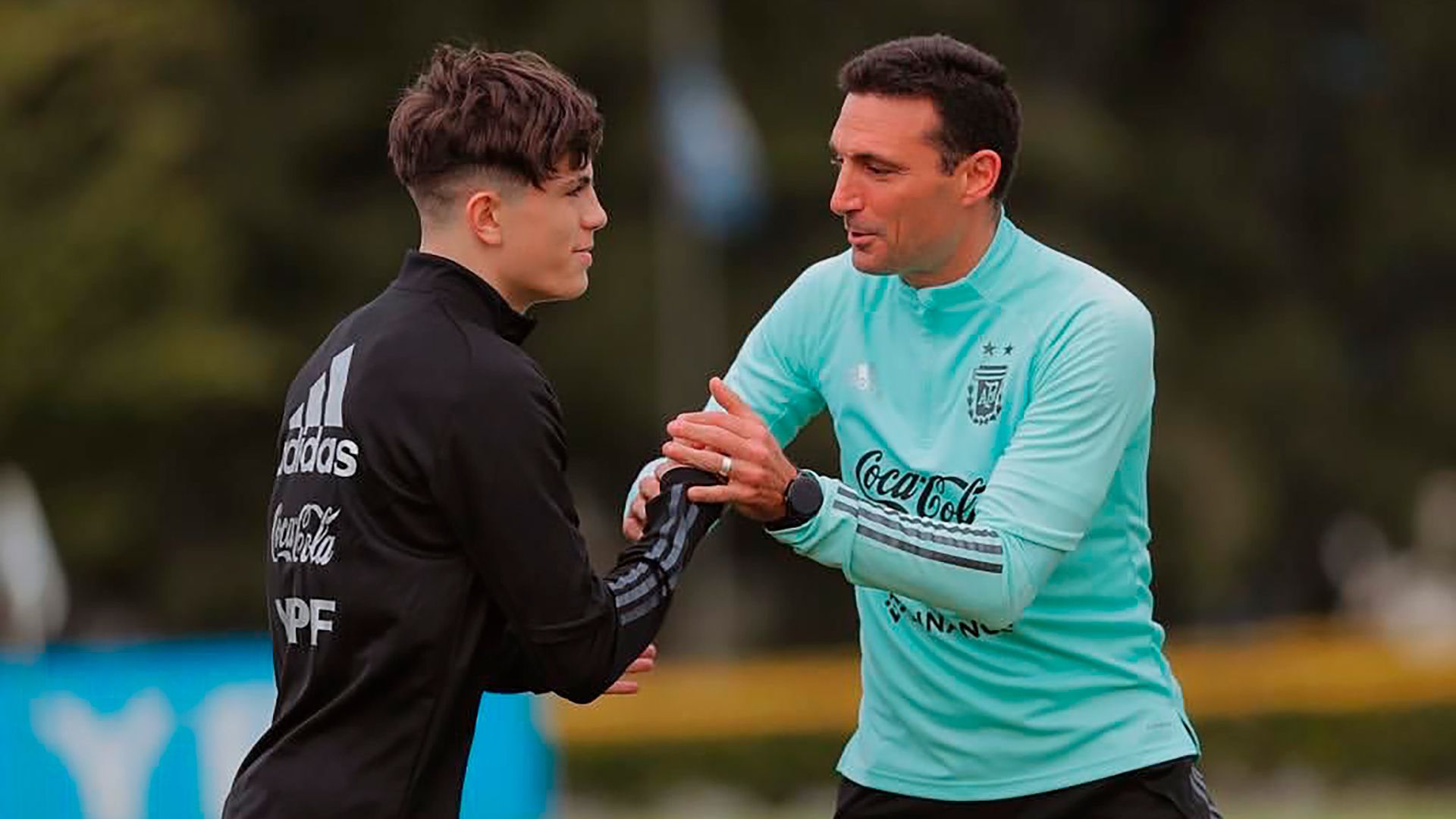 For the last double date of the South American Qualifiers on the way to the 2022 World Cup in Qatar, Lionel Scaloni set out to see up close a group of youths that Argentina can look forward to for the future. One of them is Alejandro Garnacho, a 17-year-old striker who belongs to Manchester United and would have a real chance of scoring minutes tomorrow against Venezuela in La Bombonera.

The story of the attacker from Madrid, of South American descent, became known after his convocation: “I was born in Madrid, but my mother is Argentinian, like all her family, and it will be an honor to be able to represent Argentina, just as it was at the time to represent Spain. I am very excited about this opportunity. I can’t wait for the time to come and make the most of it.” The promise he already played for Spain’s U18 has open credit in Albiceleste.

Although the coaching staff will take a few more hours to define the eleven with which they will receive Vinotinto tomorrow, from 20:30 at the Alberto J. Armando stadium, Garnacho bids to go to the bank and until he has the possibility of entering. The national team suffered several casualties and Scaloni analyzes which lineup to use. With Lautaro Martínez with COVID-19, Angel Di María injured and even Lionel Messi recovering from influenza syndrome, the drinkable alternatives in the offensive are Joaquín Correa, Ángel Correa, Manuel Lanzini, Julián Álvarez and Lucas Boyé, an experienced rookie.

Garnacho, as a child, with Argentinian clothing

The boy from United is one of the brand new additions to the Argentine team. Matías Soulé (Juventus) and Luka Romero (Lazio) had previously received calls. And after Javier Mascherano’s follow-up, this call included Franco and Valentín Carboni (Inter), Nicolás Paz (Real Madrid) and Tiago Geralnik (Villarreal), as well as a Garnacho who recently delighted everyone with a great goal for the FA Youth Cup.

“Since childhood I have encouraged both teams. For me, this is going to be more than talking about me both inside the club and outside, but this is not the important thing. I am still focused on my sport, my work, which is football, and I am very excited about this opportunity. I’m still young, this is just the beginning of my career and I’m just focused on playing football, which is what I like. And in continuing to improve as well,” said with a Spanish accent the youth who started at Atlético Madrid but was sold for 500 thousand euros a while ago.

Oblivious to what is spoken around him, Garnacho enjoys his present. On his Instagram account he posted an image with Lionel Messi at the Ezeiza complex and the caption: “Dreams really do come true”.

And if Alejandro doesn’t jump off the bench against Venezuela, he’ll still have one more chance next Tuesday, when Argentina visits Ecuador in Guayaquil to close his qualifying participation.

THE MODIFICATION IN THE FIFA REGULATIONS THAT WILL PREVENT ARGENTINA FROM HAVING EXCLUSIVITY WITH GARNACHO, AT LEAST FOR NOW

Alejandro Garnacho could still choose to play for Spain (Grosby)

In September 2020, the 70th annual Congress of the international federation was held (due to the pandemic context, for the first time remotely) and some new regulatory provisions were registered there, including exceptions to the general ban on changing national teams. Representatives of the 211 nationals that are members of FIFA cast their electronic votes and approved that players will have some clauses that they can use to modify eligibility internationally.

Thus, a footballer who had played on a certain national team may request a change in country eligibility if he meets any of these requirements:

1) At the time of playing his first official competition match with his current federation of any football category and discipline, he already possessed the nationality of the federation he wishes to represent.

2) At the time of playing his last official competition match of any football discipline with his current federation, he was not yet 21 years old.

3) He played a maximum of three international “A” matches of any football discipline with his current federation, both in official and unofficial competition.

4) At least three years have passed since he played the last international match “A” of any football discipline with his current federation, both in official and unofficial competition

5) He never participated in any international “A” match in the finals of a FIFA World Cup or a confederations tournament.

Alejandro Garnacho, like the other young promises of the Argentine national team, so far they are able to appeal to any of these resources to be called up by another national team. This is why the Albiceleste will not be able to shield them as it once did with Messi.

However, he will be able to continue with the seduction operation, which began with the follow-up by the AFA Scouting department, continued with telephone calls to the protagonists and their families, and today marks a new stage with the summons. And with minutes on the field in a knockout match in the case of Garnacho?

FIFA started the second sale of tickets for the 2022 World Cup: how to buy them and how long can they be purchased

Fantino’s sentence that generated a stir on the networks: “I give you that Argentina is eliminated from the World Cup and that Boca is champion of the Liberators”

Pablo Aimar’s “commandments” in the Argentine national team: what he took from Bielsa and Pekerman, the value of the shirt and football as a game