Among the cranes and containers of the port of Rotterdam is a surreal sight: a herd of cows peacefully feeding on board what calls itself the world’s first floating farm.

In the low-lying Netherlands where land is scarce and climate change is a daily threat, the three-story glass and steel platform aims to show the “future of breeding”.

The buoyant bovines live on the top floor, while their milk is turned into cheese, yogurt and butter on the middle level, and the cheese is matured at the bottom.

“The world is under pressure,” says Minke van Wingerden, 60, who runs the farm with her husband Peter.

“We want the farm to be as durable and self-sufficient as possible.”

The cows are a sharp contrast to the huge ships and the smoke from the refineries of Europe’s biggest seaport, which accounts for 13.5 percent of the country’s emissions.

With their floating farm, which opened in 2019, Peter and Minke say they wanted to “bring the countryside into the town”, boost consumer awareness and create agricultural space.

The Dutch are no strangers to advanced farming methods, using a network of huge greenhouses in particular to become the world’s second biggest agricultural exporter after the United States.

But that has come at a cost. 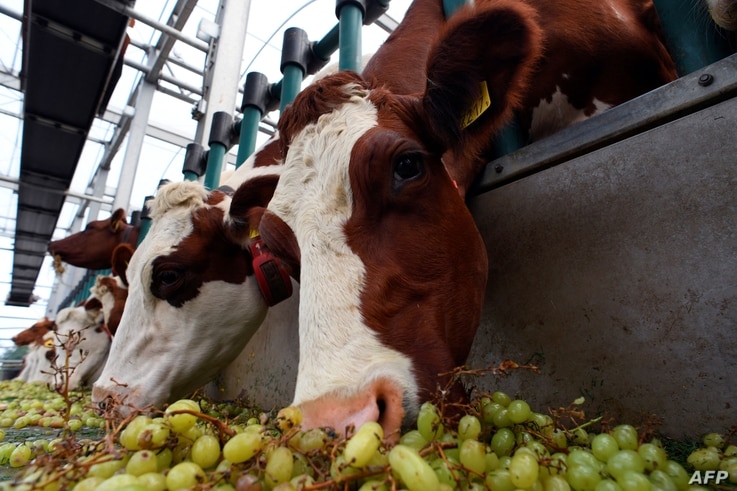 ‘Moves with the tide’

The Netherlands is one of Europe’s largest per capita emitters of climate change gases and faces a major problem with agricultural emissions, particularly in the dairy sector which produces large amounts of methane from cows.

Those emissions in turn fuel the rising waters that threaten to swamp the country, a third of which lies below sea-level, and further reduce the land in one of the most densely populated nations on Earth.

The floating farm therefore aims to keep its cows’ feet dry in both the long-term, by being sustainable, and the short-term, by, well, floating.

“We are on the water, so the farm moves with the tide — we rise and fall up to two meters. So in case of flooding, we can continue to produce,” says Minke van Wingerden.

In terms of sustainability, the farm’s cows are fed on a mixture of food including grapes from a foodbank, grain from a local brewery, and grass from local golf courses and from Rotterdam’s famed Feyenoord football club — saving on waste as well as the emissions that would be required to create commercial feed for the animals.

Their manure is turned into garden pellets — a process that helps further cut emissions by reducing methane — and their urine is purified and recycled into drinking water for the cows, whose stable is lined with dozens of solar panels that produce enough electricity for the farm’s needs.

The farm is run by a salaried farmer but the red and white cows, from the Dutch-German Meuse-Rhin-Yssel breed, are milked by robots.

The cheeses, yogurts and pellets are sold at a roadside shop alongside fare from local producers.

The products are also sold to restaurants in town by electric vehicles.

“I was immediately seduced by the concept,” says Bram den Braber, 67, one of 40 volunteers at the farm, as he fills bottles of milk behind the counter of the store.

“It’s not blood running through my veins, it’s milk.”

The idea of the farm is also to make farming “more agreeable, interesting and sexy”, and not just to be environmentally friendly, says Minke van Wingerden.

When she and her husband first approached port authorities with the idea to build a floating farm, they said “are you nuts?”, she recalls.

But the farm is set to turn a profit for the first time at the end of 2021, with consumers apparently ready to pay the 1.80 euro ($2.12) a liter for milk produced there, compared to around one euro at a supermarket.

They are also aiming to build a second floating farm to grow vegetables, and to export their idea, with a project already under way in the island nation of Singapore.

Most importantly, while farming goes greener, the animals don’t.

“No, the cows don’t get seasick,” says van Wingerden. “The water moves only a little bit, it’s like you were on a cruise ship.”